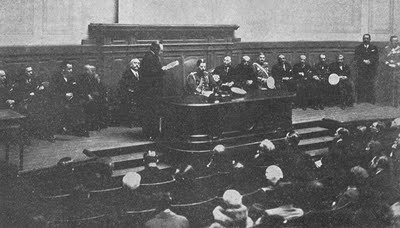 In a letter to the President of the Council of Ministers – a document that can be considered a true founding act, King Carol I declared “his desire to build an establishment for the well-being of the university youth from all faculties throughout the country, endowed with an always open library”.
The future place of culture was to be certified by law as a state institution, under the administration of the Ministry of Cults and Public Instruction.
The design of the building was entrusted to the French architect Paul Gottereau, author of the Palace of the House of Deposits, Consignments and Savings and the old Royal Palace. The works begining in 1891, would be completed in 1893. The next two years, until 1895, would be devoted to endowment and arrangement.

King Carol I Inaugurated the Carol I University Foundation. For 50 years, the University Foundation was to undertake the mission of contributing to the formation of the intellectual elite, especially by awarding grants, encouragement prizes, scholarships to worthy research students, and by printing valuable papers, undergraduate, or doctoral theses.

After 20 years, in 1911, under the coordination of the same architect, the extension of the old edifice begins. Put into use on May 9, 1914, the building will stand out as one of the remarkable urban landmarks of Bucharest. With an amphitheater of over 500 seats, with 4 reading rooms and storage rooms, the library will acquire a European level organization and endowment, becoming a real forum dedicated to study and research.

Due to the high level of cultural activities carried out, especially in the period between the two world wars, the University Foundation Amphitheatre would be established as a reference point in the spiritual universe of Bucharest.

The first Conference of librarians took place, under the guidance of Ion Bianu and Em. Bucuţa.

The cultural groups Forum, Poesis, Criterion organized conferences and symposia bringing together many of the personalities of the time. Over time, the prestige of the Foundation and the future Central University Library will be strengthened by the illustrious names of some writers, university professors, cultural animators, who worked as librarians: G. Dem Teodorescu, Şt. O. Iosif, Al. Tzigara Samurcaş (director of the library between 1899 and 1946), Mircea Florian, C. Rădulescu Motru, Ion Clopoţel, C. Vlădescu – Racoasa, Mircea Tomescu. 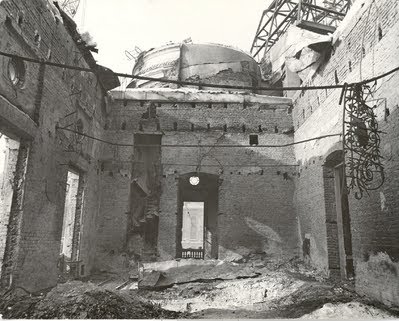 Thus, the Central University Library became the coordinating center of the network of faculty libraries of the University of Bucharest. In order to create a coherent and functional ensemble, the period to follow would be characterized by unwavering efforts to reorganize the libraries in the faculties, seminars, laboratories and dormitories.

Since 1963, the Central University Library is the National Center for endowing with Romanian publications the Romanian language, literature and civilization lectureships abroad.

The Central University Library had gradually become the most complex university library in the country. The document collections of the branch libraries followed a development dedicated to the current study, specific to each of the faculties and as for the Headquarters, the configuration of the publications fund had an encyclopedic structure, providing a multidisciplinary basis for deepening university studies and research.

The concern of the institution’s specialists for the highest possible orientation of the users was materialized in the elaboration of a wide range of bibliography tools, containing current and retrospective information.

The flames of the revolution turned the books to ashes and the walls to ruins.

The “Carol I” University Foundation Building in October 2010

Under the auspices of UNESCO, Director-General Federico Mayor called on all governments, organizations and political institutions to participate in the reconstruction and modernization of the library.

Due to the impressive human solidarity, in only a few years, except for the unique documents, most of the publication fund would be replenished through exchanges and donations. Over 100,000 volumes were donated from individuals and institutions in the country and over 800,000 volumes from abroad.

Giving new foundations of continuity to the tradition, the reconstruction effort had as main orientation the project of extension and modernization of the architectural complex, an endeavour meant to ensure an ambitious approach of the second century of existence.

In the expansion project, the architectonical establishment of the Central University Library consisted of three buildings, integrating together with the Foundation Palace, the building of the former Dacia Bank – Romania (destroyed in the same fire in December 1989) and the future construction of the Boema Building. The necessary expansion of the settlement was based on an older idea and initiative of the historian Nicolae Iorga, who, in 1931, for the same purpose, under the tutelage of the Ministry of Public Instruction, purchased 1,600 square meters near the University Foundation buildings.

Despite the shortcomings of the temporary relocation, between 1990 and 2000, the Headquarters continued its public activity in the buildings in Calea Plevnei no. 59, performing library services at standards appreciated by the users.

Although the period is marked by great financial efforts dedicated to reconstruction and computerization, the restoration of the publications fund would remain permanently in the center of attention. Along with donations and exchanges, the acquisition of works of real value on the domestic and international publishing market was the basic policy.

According to the modernization program, since 1990, UNESCO experts in collaboration with library specialists have developed a computerization project of the Central University Library.

The database created in CDS / ISIS contained approximately 60,000 records (books entered and processed in the library after 1990).

On February 28, the Central University Library’s computerized system was presented to the public and, as of March 1, it became operational for specific library activities through the integrated VUBIS program, received through a TEMPUS program. In June, a complete and permanent connection to the INTERNET was made. During the same year, the Loan Center database was also set up in VUBIS for the Headquaters. Thus, the Central University Library became the first university library in Romania to create a computerized infrastructure, offering complex services for accessing and investigating both its own databases and national and international ones.

In resonance with the difficulties of reconstruction and modernization, prof. univ. dr. Ion Stoica, the Director General of the Central University Library, stated at the celebration of the centenary of the library the following:

“As so many times in their troubled history, Romanians have found the strength to rise above the pain and start all over, with the support of government agencies in the country, many organizations abroad and the sympathy of thousands and thousands of people from all over Romania and elsewhere, the staff of the Central University Library in Bucharest passes into the second century of existence with the hope and the will to give back to the national culture this great treasure.”

Implementing the same VUBIS system, the branch libraries were computerized. The first ones were the libraries of Mathematics and Letters, followed by those of Geography, Physics and Biology.

The first stage of the operations for moving the publication funds from the temporary headquarters in Calea Plevnei was underway.

The operations of moving the document collections to the Boema Building storage rooms are completed during 2000. The entire period is characterized by the mobilization of all resources in order to refunctionalize and open the library to the public.

The Central University Library took part in the “Parteneriat InfoEuropa” project, developed within the PHARE EUROPA program and financed by the European Union. As a result of this attrendance, the Europe Reading Room was organized providing access to European-themed documents, and the EUREF interinstitutional database was also created.

This is the day in which the Central University Library in Bucharest (Headquarters) was reopened. The event was attended by many personalities from the political and cultural world, from the country and abroad.

During the Central University Library Days, 110 years were celebrated from the inauguration of the “Carol Iˮ University Foundation (March 14, 1895). The guest of honor stood out: His Majesty, King Mihai. The events organized on this occasion included:

-The ACAD. C. Bălăceanu-Stolnici, the Prof. Neagu Djuvara, Prince Mihai Dimitrie Sturdza, the Prof. Tudor Berza and Radu Ionescu evoked the role and importance of the Foundation in the cultural life of Bucharest.

– Thematic exhibitions were presented to the public.

A bronze plaque dedicated to the new name of our institution and an effigy of King Carol I were unveiled. The bust of “Carol Iˮ was placed in the niche in front of the Professors’ Reading Room.

The Conferences of the “Carol Iˮ University Foundation were resumed.

The book and photography exhibition “Carol I – the reconstruction of a destinyˮ was presented to the public.

Their Majesties, King Mihai and Queen Anne, were the guests of honour.

– Romfilatelia launched a jubilee philatelic edition dedicated to the library, celebrating 105 years since its inauguration.

– It was released the volume called “Nicolae Bănescu – Biobliografie,ˮ dedicated to the last director of the “Carol Iˮ University Foundation.

The ceremony of the unveiling of the equestrian statue of King “Carol Iˮ took place in front of the library building, on same the place where the work of the sculptor Ivan Mestrovici was originally located.

“Carol Iˮ Central University Library is the first library in Romania to be included in the cultural itinerary called “Noaptea Muzeelorˮ.

The first edition of the Strada de C’Arte Festival took place, and its aim was to bring together the seven arts in unconventional spaces. Thus, the public was invited to participate in a book fair, and also to visit the library or to attend film screenings, recitals, plays.

All library reading rooms were equipped with wireless internet connection.

On behalf of Her Majesty King Mihai I, Her Royal Highness Crown Princess Margaret of Romania awarded the “Crucea Casei Regale a României” to “Carol I” Central University Library. The decoration was handed over during a ceremony at Peleş Castle.

In the Amphitheatre of the “Carol I” Central University Library was held the forum “New perspectives of Romanian-American cooperation based on the Strategic Partnership,” a dialogue forum dedicated to the Strategic Partnership between Romania and the USA, in the context of celebrating 135 years of bilateral diplomatic relations. The event was attended by the President of Romania, Klaus Werner Iohannis.

In the Amphitheatre of the “Carol I” Central University Library, under the High Patronage of the President of Romania Klaus Werner Iohannis, took place the launch of “World Development Report 2018: Learning to Realize Education’s Promise,” a document that analyzes the state of education globally.

The “Carol I” Central University Library is a complex organizational structure, consisting of the Headquarters, the Pedagogical Section “I.C. Petrescu ”and 16 branch libraries, located in the University of Bucharest. In the branch libraries, at the loan centers, only the students and teachers of the faculties of the University of Bucharest have access, and in their respective reading rooms, all categories of users have access. All categories of users have access to the Headquarters.

Page load link
We use cookies on our website to give you the most relevant experience by remembering your preferences and repeat visits. By clicking “Accept All”, you consent to the use of ALL the cookies. However, you may visit "Cookie Settings" to provide a controlled consent.
Cookie SettingsAccept All
Manage consent

This website uses cookies to improve your experience while you navigate through the website. Out of these, the cookies that are categorized as necessary are stored on your browser as they are essential for the working of basic functionalities of the website. We also use third-party cookies that help us analyze and understand how you use this website. These cookies will be stored in your browser only with your consent. You also have the option to opt-out of these cookies. But opting out of some of these cookies may affect your browsing experience.